When Scouts want to meet young people from another country, they usually think of attending a World Jamboree. But few people realize that each year more than half a million Scouts and Guides “get together” over the airwaves for the annual Jamboree-on-the-Air (JOTA). The World Scout Bureau reported that the 2010 JOTA had just over 700,000 Scout participants from nearly 6,000 amateur radio stations!  Modern technology offers Scouts the exciting opportunity to make friends in other countries without leaving home. JOTA is an annual event in which Boy and Girl Scouts and Guides from all over the world speak to each other by means of Amateur (ham) Radio. Scouting experiences are exchanged and ideas are shared via radio waves. Since 1958 when the first Jamboree-on-the-Air was held, millions of Scouts have met each other through this event. Many contacts made during JOTA have resulted in pen pals and links between Scout troops that have lasted many years. With no restrictions on age or on the number of participants, and at little or no expense, JOTA allows Scouts to contact each other by ham radio. The radio stations are operated by licensed amateur radio operators. Many Scouts and leaders hold licenses and have their own stations, but the majority participate in JOTA through stations operated by local radio clubs and individual radio amateurs. Some operators use television or computer-linked communications. 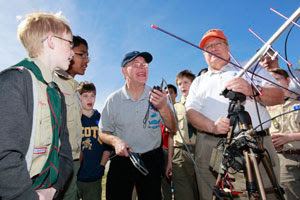 JOTA is a spectacular opportunity to introduce Scouts to amateur radio. For many, this will be their first exposure to the world of ham radio. Some will go on to become hams, enjoying the hobby for a lifetime. A few will even find the basis of a career in science and technology.

We’ve assembled a fair bit of information here to help you work with your Scouting partner in setting up this event. You should also consult the American Radio Relay League information at www.arrl.org/scouting

As a licensed amateur radio operator, you must, of course, comply with FCC regulations regarding frequencies, power, quality of signal, etc. Third-party traffic is approved by the FCC. Therefore, Scouts can talk with other Scouts when both stations are licensed by the FCC. When the station you are in contact with is outside U.S. jurisdiction, a third-party agreement must exist between the U.S. and that country’s telecommunications authority. If an agreement exists, then Scouts in the U.S. may talk directly to the Scouts in that country. If not, then the licensed ham radio operator must talk for the Scouts. The full list of countries with a designation of which countries have third-party agreements with the U.S. is at this link: www.arrl.org/third-party-operating-agreements